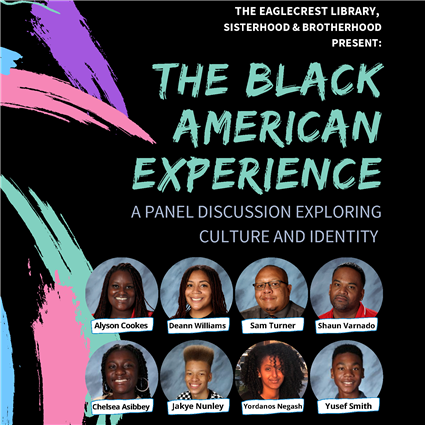 For the past three years, Eaglecrest High School has hosted a Black American Experience panel for their school community. This year, for the first time, four students participated on the panel alongside faculty members.

Eaglecrest sophomores Chelsea Asibbey, Yordanos Negash, Jakye Nunley and Yusef Smith shared their lived experiences with colorism. Colorism, which has been a prominent topic in discussions of race, is linked to prejudice related to being light-skinned versus dark-skinned. The panel members discussed their experiences with colorism, both at Eaglecrest and elsewhere. The Eaglecrest Library and the Brotherhood and Sisterhood affinity groups hosted the event.

“Many of our students in our Sisterhood affinity group were struggling with colorism and wanted to bring that conversation to the larger Eaglecrest community,” school psychologist Barbara Edwards said. “We had about a hundred people join us for this conversation, which was incredibly raw and vulnerable.”

One of the students, Yusef Smith, shared a story about when he learned that his lighter-skinned friends were going to the mall -- and they weren’t inviting him.

“I was told that my darker skin was a ‘threat,’ and that they didn’t want to get followed around by security,” Smith said. “And then I couldn’t get angry, because then I’m feeding into the stereotype.”

Classmate Chelsea Asibbey shared a similar experience, noting that colorism can be very prominent in dating and relationships. She related a time when a fellow student told her that she should marry someone white so her children’s skin wouldn’t be so dark.

“How do you even react to that?” Asibbey wondered aloud during the panel. “If I react and freak out, then I’m an angry black woman. I felt so overwhelmed and it’s so destructive … I wouldn’t wish that feeling on anyone.”

The students agreed that these conversations are not only important, but they impact everyone. Students expressed their hope that this panel would inspire more Black students to join clubs and activities, and that more staff members would speak up when racist or colorist comments are made.

“I think staff members have a big role in this as a place of authority,” sophomore Yordanos Negash said. “Students can call it out, but it makes more of a difference when an adult says something. Sometimes we’re in shock or disoriented at hearing something so horrible, and that’s why we’re not speaking up at that moment.”

For the students and faculty, addressing the root issue was key. Jakye Nunley talked about how he has seen his family and others change themselves to fit in, something he is reluctant to do.

“I’ve always watched my family code-switch and adapt to the environment they’re in,” Nunley said. “We have these ideas that you’re ‘acting white’ or not living up to the standards for being Black. I need to respect myself enough to be who I am, because who I am is smart, dedicated and hopeful.”

After the panel, students reflected on the opportunity, noting that they had been approached by other students wanting to learn more and find ways to become involved.

“Put your story out there,” Asibbey said. “After this event, I will never underestimate the power of testimonials. I’ve had great conversations and appreciate this platform to help us address these kinds of issues.”

“I found myself in a mix of emotions after the panel, with a bittersweet energy lingering in the air,” Negash said. “It was extremely heartwarming to know that many of us fought similar battles in and out of our school. On the other hand, however, I learned about some of the ugly instances my peers had to unfortunately go through. As painful as it is, I am beyond grateful that I was able to be a part of this event because it allowed me to explore new perspectives.”