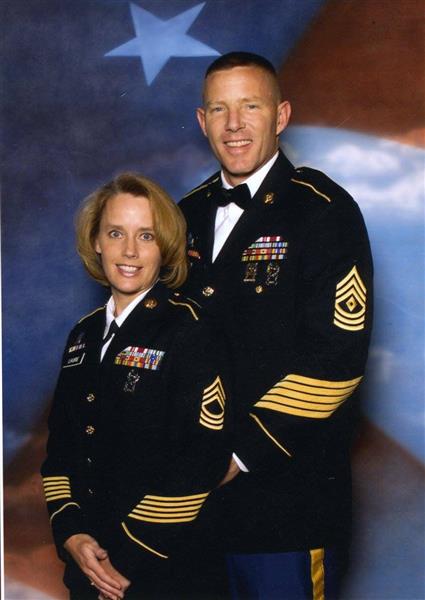 When CCSD teacher and retired First Sergeant Jeanine Laurie first joined the Army over twenty years ago, she planned only to stay long enough to get money for college via the GI Bill.  After serving for twenty years, she looks back on her career as an incredible opportunity that has changed her life.

Laurie, who teaches STEAM (science, technology, engineering, art and math) at Pine Ridge Elementary, served as a signal intelligence analyst in the Army and began her duty in Germany. As an intelligence analyst, she’s supported search and rescue and hostage missions, among other crises. Much of her work is classified, but she has a strong appreciation for the growth and learning that the Army gave her.

“For a shy girl who’d never really been out of Ohio, it was a tremendous journey,” Laurie said. She has served in Germany twice, Colorado, Florida and Hawaii and jokes that she must have gotten the “toughest” assignments. She was in Germany when the Berlin wall fell and took a hammer and chisel to join others who were taking the wall down.

“I felt like I got to be part of something bigger than myself, my unit or even the United States,” Laurie said. “Being in the Army has given me a global perspective and a real understanding of how influential America can be.”

When an assignment gave Laurie and her family an opportunity to return to Colorado for the second time in 2003, she and her husband (also an Army veteran) jumped at the chance. They chose Cherry Creek Schools and were honored by how much the district has done to serve military families.

“There were always events to honor our service members and I feel like the district really takes the time to ensure students, faculty and staff really understand the sacrifices made by those who serve and their families,” Laurie said.

The military gave Laurie a place where she felt like she belonged. She was inspired by her brothers, who joined the ROTC and Air Force to pay for college. While she initially joined the Army for a three-year contract, she found she enjoyed the problem-solving of her role and analyzing messages (from faxes to phone calls to text and more) to help the intelligence community keep the peace. She credits the Army with providing her the life experience and values of selfless service, loyalty, and self-confidence that transformed her.

Laurie retired as a First Sergeant in charge of 120 soldiers and had conquered a fear of public speaking. After retirement, she decided to stay at home with her children and began to volunteer with the PTCO and reading groups. When a first-grade teacher suggested Laurie consider teaching as a second career, she gave it some serious thought and eventually pursued her teaching career. While serving in the military has given her helpful skills as a teacher, she still found areas to grow.

“Being a teacher is hard. Earning a kid’s respect is different than earning a soldier’s respect, and you don’t have that automatic authority,” Laurie said. “But when you build a relationship with that student, it makes all the difference.”

Laurie enjoys teaching STEAM and challenging her students to expand their comfort zone in much the same way she has grown. She highlights different industry leaders from a variety of genders and backgrounds, hoping her students will see an opportunity to become leaders in STEM one day. She is honored to be part of Cherry Creek Schools and says it brings tears to her eyes to see how much work the district puts into honoring veterans.

“I have received so many letters from students thanking me for my service, and it humbles me to see our schools taking the opportunity to instill that sense of patriotism in kids,” Laurie said. “I’m proud to say I’m still getting to make a difference and hope our kids are inspired to serve, too.”