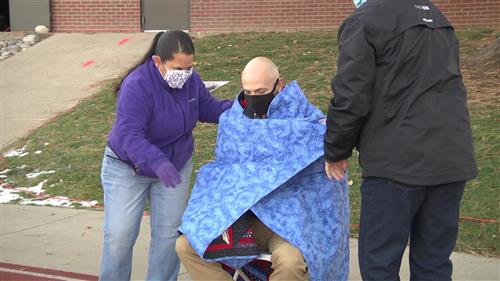 Mark Moore had plenty of familial heroes to follow when it came to pursuing a path in the military.

Moore, who’s been a special education teacher at Dry Creek Elementary for 12 years, pointed out that his father, his grandfather and his uncle all had military experience on their resumes. Before he came to the Cherry Creek School District to teach, Moore followed their example.

He was a Lance Corporal in the Marines from 1999 to 2003. He served in the Iraqi Freedom Campaign in 2003, and military service was a cornerstone of his life long before he decided to shift gears and begin working in education.

Though he’s been in that field for more than a decade, Moore hasn’t forgotten his service, and neither has the school district that he now calls home. Recently, Moore was one of 11 recipients of an honor that celebrates the commitment, the sacrifice and the service of military members in the local community. Moore recently received a Quilt of Valor, a hand-crafted tribute to service fashioned by a foundation dedicated to honoring the nation’s heroes.

Moore received his hand-sewn quilt on a sunny Friday morning at Stutler Bowl on the Cherry Creek High School campus, and Quilts of Valor Foundation Group Leader Jan Weber was on hand to offer context to the ceremony.

“We consider it a privilege to honor you,” Weber said during the ceremony on Oct. 30, as assistants wrapped Moore in a 60-by-70-inch quilt made by members of the Smoky Hill Quilt Club, a local chapter of the larger Quilts of Valor Foundation. “Thank you for your service.”

Moore, who was joined by his wife Laura and his young son Vance for the ceremony, said the recognition was a great honor, and he added that it was only the latest gesture from the school district he’d come to call home. Every year, Moore pointed out, Cherry Creek Schools makes a concerted, district-wide effort to honor and celebrate veterans from the community and beyond. CCSD’s annual Veterans Day celebration spans an entire week, and seeks to properly credit those who’ve made the ultimate sacrifice for their country.

Moore added that his path as a SPED teacher at Dry Creek has been a meaningful and powerful next step following his service in the military. The choice to become a teacher came almost immediately after he had a chance to conduct classroom observations.

“Within the first five minutes of that observation, I knew I wanted to be a teacher. This is a job that finds you,” he said. “I’m so happy to work in a district that honors veterans in such an amazing way every year.”