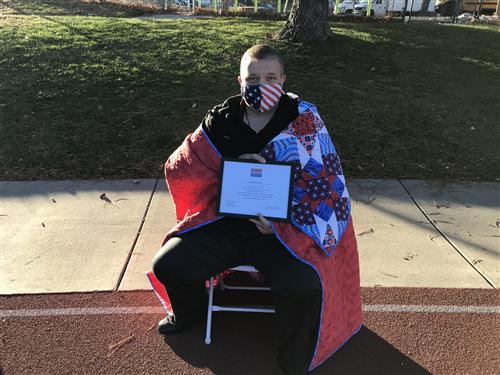 For Dave Henderson, military service offered an ideal bridge from graduating from Overland High School to serving as the Cherry School District’s Deputy Chief of Operations.

Henderson served as a specialist in the U.S. Army from 1996 to 2000, and his stint included more than a year in South Korea. It was a period that offered new perspectives, valuable experience and an in-depth perspective into a different culture and mindset.

“It was an entirely different experience serving in Korea,” recalled Henderson, who’s worked in CCSD’s Operations Department for more than four years. “The country was prepared for war at any moment. It was enlightening to be in that environment, to see how the people and the culture operate.”

Henderson was one of 11 recent recipients of an honor that celebrates the commitment, the sacrifice and the service of military members in the local community. He recently received a Quilt of Valor, a hand-crafted tribute to service fashioned by a foundation dedicated to honoring the nation’s heroes. For Henderson, who oversees the district’s most significant operations and construction projects, the ceremony was a moving tribute from the district he’s called home, in one way or another, for decades.

“I’m speechless. This is an incredible honor,” said Henderson, who graduated from Overland High School. “In the Cherry Creek School District, we honor veterans every year, and I’m so grateful to work in a district that does such an amazing job. We do it bigger than anyone else.”

As Henderson noted, CCSD has long been committed to paying tribute to local veterans in an extraordinary way. Every year, a weeklong Veterans Day celebration sees every single district school paying tribute to service in its own unique way.

Henderson said the effort is a valuable way of paying tribute and of offering students insights into the value of military service.

“These celebrations exposes our kids to the true value of serving in the military,” Henderson said. “It shows them that the military is a great place to go for folks who want to serve their country. It shows that service can make you more confident, it can help you overcome fear and go on to great achievements.”

Henderson was one of 11 veterans to receive a Quilt of Valor during a special ceremony held on Oct. 30. The quilts came from the local chapter of the Quilts of Valor Foundation, an organization dedicated to connecting service members of all backgrounds with hand-crafted tokens of appreciation.

Henderson wore the 60-by-70-inch around his shoulders as colleagues and friends gathered at Stutler Bowl on the Cherry Creek High School Campus to celebrate his achievements.

“I was so happy when I came back to work at Cherry Creek Schools to learn that this was part of the culture here,” he said. “This is such a powerful tribute.”