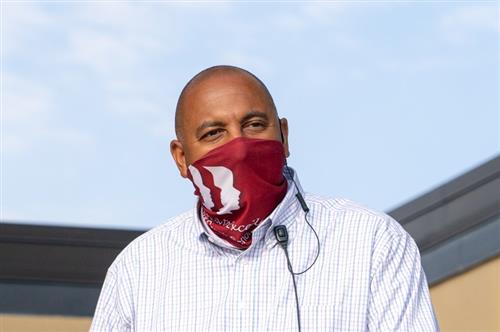 When Andre Pearson was considering a monumental life shift, an Air Force colonel offered a piece of advice that would prove decisive.

Pearson, who’s been the principal of Mission Viejo Elementary since 2009, followed a somewhat unorthodox path in his career as an educator. Before becoming a teacher in Los Angeles, before he’d move on to posts as an assistant principal and finally a principal in Colorado, Pearson was enlisted in the Air Force.

Specifically, he handled high-profile financial contracts for Air Force satellites, a position that came after he trained at the Air Force Academy in Colorado Springs. It was when he was enlisted in Los Angeles that he decided to take a side gig as a teacher, a decision that quickly revealed an alternate life path.

Pearson loved teaching. He loved working with kids, and he soon felt the urge to pursue a career as an educator full-time. It was a difficult decision, one that was ultimately steered by the wise words of one of Pearson’s superiors.

“It was a scary choice at that time, but it worked out well,” Pearson said. “When I was debating about getting out of the Air Force, one of my bosses, this colonel, he said, ‘Being a teacher will be like serving your country in another way.’”

Years later, Pearson still thinks about those words of wisdom, especially during the Cherry Creek School District’s weeklong celebration of Veterans Day. At Mission Viejo, which was the first school in Colorado to earn the official designation as a Purple Heart School, the tribute to veterans is an honored tradition. Even before the district as a whole began its annual, formal celebration of Veterans Day in 2011, Pearson and his staff used the holiday as a platform to honor the community’s heroes.

For Pearson, the yearly tribute is a chance to acknowledge the sacrifice and commitment of local veterans, but it also serves as a reminder of a previous life.

“On Veterans Day, it is nice to reminisce and reconnect and share stories. Every year, it’s great to share my story and reconnect a little bit,” Pearson said, hearkening back to that advice from his commanding colonel that would be so important. “I feel like I’m still serving my country, just differently than protecting and serving in military.”

In his role as Mission Viejo principal, Pearson has the opportunity to share his insights with students. He notes that his service equipped him with valuable skills that have made his career in education more successful and more meaningful.

“Going through the Air Force Academy and being a leader in the military helped prepare me to lead a school. It’s a different style, but I think the Academy and my time as an Air Force officer helped me a lot,” Pearson said. “Also, I can talk to students about my experiences, about satellites, missiles, airplanes – all the things I had to learn about in the Air Force. I can share information about Science, Technology, Engineering and Math (STEM). I can help them make real-world connections.”

Along with Mission Viejo staff members like Sandy Roberts, who was the school’s PTCO president when it first started conducting Veterans Day events and who now serves as Mission Viejo’s office manager, Pearson helps the messages of the holiday come to life for all students.

“There are a lot of people involved in what we do for Veterans Day,” Pearson said. “Every year, it’s so cool to see our entire community use their talents to honor our veterans.”