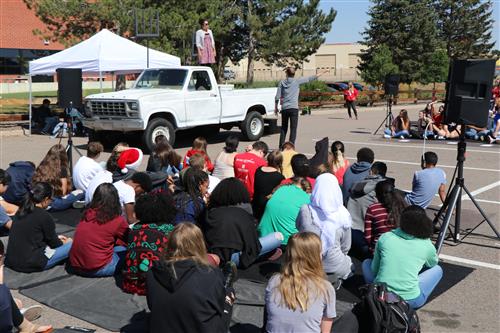 Juliet’s balcony was the flatbed of a pickup truck; Romeo’s perch was the hot asphalt of a parking lot.

William Shakespeare’s star-crossed iconic lovers came to life in an unlikely setting on Sept. 9, but that didn’t make their words any less powerful. As actors from the Denver Center for the Performing Arts’ education program “Shakespeare in the Parking Lot” troupe performed key scenes from “Romeo and Juliet” in the open air, just outside the doors of Smoky Hill High School’s gymnasium, the hundreds of teenagers in the audience were clearly engaged.

They responded with shouts of tension when fights between Montagues and Capulets broke out in front of the pickup truck that served as the play’s main set piece. They watched in silence as Juliet called “Wherefore art thou, Romeo?” from the shelter of her balcony, and found his unexpected, impassioned response from the shelter of her garden. They expressed their surprise and frustration when the troupe acted out one of the most tragic twist endings in Western literature, and both protagonists met their untimely end.

According to Justin Walvoord, teaching artist and program coordinator/manager for the Denver Center’s “Shakespeare in the Parking Lot” series, that kind of response isn’t unusual. The program travels to high schools across the state, and this was their first visit to Smoky Hill.

“We get a whole range of responses,” Walvoord said before the final performance of “Romeo and Juliet” for Monday, Sept. 9. The next day, the troupe would present their abbreviated version of one of Shakespeare’s best-loved comedies, “A Midsummer Night’s Dream.” “Some of these students don’t know the story, have never seen Shakespeare before. We’re giving them that first experience, so that they get to see the core of these stories that transcend time.”

That artistic mission was one of the draws for Jen Radosevich, a teacher librarian at Smoky Hill who worked to bring the Shakespeare troupe to the school in time for the beginning of the school year. In addition to the two days’ worth of parking lot performances, the group was set to lead workshops in English and theater classes for a full day. The combination of live performance and in-person teaching appealed to Radosevich as a way to bring the work of William Shakespeare to light in an immediate and powerful way.

“These plays were meant to be seen, and the troupe is doing it with a very sparse set, the way that Shakespeare did it,” Radosevich said. “There’s something about that human experience that transcends language and time and place. It’s that experience of raw human emotion.”

What’s more, she added, the fact that the troupe of professional actors would be on hand to further explore the meaning, context and themes of the plays added a different kind of appeal, as did the troupe’s diversity.

“Any time you can add the professional voice of someone who’s not a teacher in the classroom, it adds legitimacy and a real-world perspective,” she said. “The troupe is very diverse in terms of ethnicity, which will be exciting for our students … It gives them a voice and perspective that they don’t always get.” 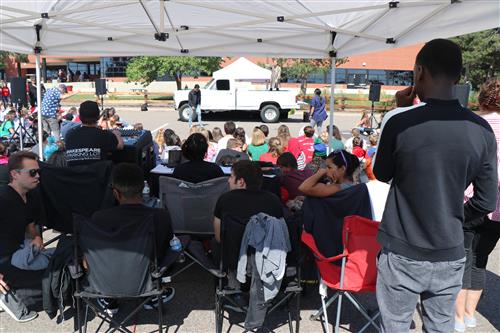 The troupe performed condensed versions of both plays, 45-minute takes on the pieces that featured essential plot points and some of the most celebrated language. Judging from the turnout on a hot fall day, that approach appealed to a broad swath of Smoky Hill students. About 1,200 students showed up on both days, with many students coming back for repeat performances.

“We reached a wide range of kids. It’s a different way to learn,” Radosevich said. “It engages a different part of your brain than simply reading the play in the classroom.”