Jen Failinger hadn’t delved much into the world of Alfred Hitchcock before she decided to audition for Cherry Creek High School’s fall theater production.

Failinger, a senior at CCHS and the president of the school’s Thespian 1730 troupe, said she wasn’t familiar with the work of the legendary British filmmaker and author who did so much to change the craft of storytelling in the 1940s, ‘50s and ‘60s. That changed when she learned that she’d be trying out for a role in the theater department’s production of “The 39 Steps,” a live radio play written by Joe Landry that’s included in “Vintage Hitchcock,” a tribute to the director’s most memorable works. 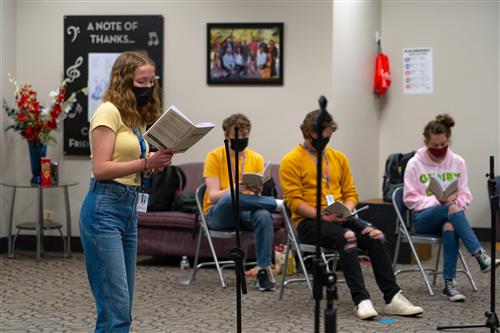 Most of Failinger’s hard work didn’t come in background research about the original author, but instead in honing her voice acting chops for a production that would be unique in the history of the Cherry Creek High School’s theater department. “The 39 Steps” is written as a radio play, a production that relies on the vocal talents of its actors to convey the action, mood and tension of a vintage murder mystery.

Instead of relying on physical performance and body language to make the story progress, the actors in this show have to rely entirely on the power of their voices. Indeed, the setup for the CCHS production, which streams online to audiences in November, will mirror the structure of a vintage radio play; actors will line up behind microphones, crew members will provide sound effects and audience members will rely on their imaginations to create a mental vision of the action.

It’s an approach that’s stemmed largely from the limitations and challenges of producing high school theater in midst of a global pandemic. Theater departments at high schools across the district have been forced to come up with innovative solutions to keep students connected with curriculum and opportunities to perform. At Cherry Creek High School, that’s translated to returning to a vintage approach to performance.

“We decided to go with a radio play for our fall production – in terms of a staging aspect, we can distance our actors and our crew members. It’s such a great opportunity for our actors to portray different characters; it commands a lot of skill,” said Alex Burkart, CCHS theater teacher. The show not only allows the students to perform in a safe and physically distanced way, but it also offers a chance for aspiring actors to explore different genres, he added. “It’s a fantastic opportunity for our kids to explore film noir and the suspense genre.”

For the actors involved, working on the show has also provided an invaluable lifeline to the arts in a stressful and challenging time. As they’ve dealt with the demands of Remote Learning, physical distancing protocols and other changes that have come as a result of the COVID-19 pandemic, students across the district have also had to sacrifice a number of activities for the sake of safety.

Being able to safely rehearse, interact and prepare a theatrical production has been an amazing boon for everyone involved in “The 39 Steps,” said Failinger, who plays one of the lead roles in the show.

“Coming to rehearsal is the best part of my day, and you can literally talk to anyone else in this theater and I’m sure they would say the same thing,” Failinger said after a rehearsal at the CCHS Fine Arts theater in early October. “Being able to think outside the box for this show has really inspired me.”

Even though students will perform the radio play on stage, physical audiences will be limited to a very small number of attendees for safety reasons. Burkhart said that the greatest number of audience members will be virtual, as the CCHS theater department streams “The 39 Steps” online and offers virtual tickets for the show’s run, which will take place in November. Tickets will be available through the Cherry Creek High School website.

Figuring out a virtual setup for audiences has only been one part of the problem-solving that’s gone into this show. From finalizing ways for the actors to safely interact onstage to finding material that fits the demands of the moment, this process has forced students and teachers alike to come up with a new way of doing things.

“In this current pandemic, we have to be innovative. If we’re not innovative, we go extinct,” Burkhart said. “We have to show that we can morph with the times. Theater has been around forever; there were periods when theater was considered a crime. If the craft can get through that, it can get through a pandemic.”