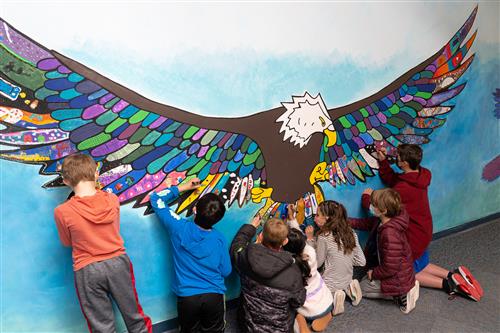 Music came to the top of Lyric Lamborne’s list of life’s inspiring forces.

Lamborne, a fifth-grader at Heritage Elementary School, speaks eloquently about the value and power of music, especially in a stretch of months that have seen plenty of challenges. As the world has seemingly turned upside down in the wake of the COVID-19 global pandemic, music has played a redeeming role.

“I’m a very musical person,” she explained on a recent sunny morning, as she joined a group of classmates to work on a new mural on one of Heritage’s main walls near the school entrance. Lamborne, along with all of the other fifth-graders in the class, had the opportunity to contribute their own original designs to the mural, which depicts a colossal eagle (the Heritage mascot) in flight, with original student designs contained within the span of its numerous feathers. “Our theme for this piece was, ‘What lifts you up,’ and music makes me happy.”

Her colorful design of a rainbow’s arc supplemented with musical notes was part of a rapidly developing tapestry of student expression. Fifth-graders filled the empty spaces with images ranging from video game controllers to family members to abstract symbols like hearts, all in an effort to add permanent notes of joy, hope and inspiration to their elementary school.

According to Sarah George, the art teacher who organized the mural project, such expressions are a stirring tribute to the perseverance, creativity and resourcefulness of the school’s fifth-graders. Originally, George planned to complete the mural during the 2019-20 school year, but the pandemic upended those plans. Heritage students, like those across the district, the state and the country, suddenly had to leave the physical classroom for Remote learning. As a result, the progress of the Heritage mural paused.

That unexpected halt, however, gave the communal art piece a deeper meaning. Drawing inspiration from the local artist Kelsey Montague, a muralist who has many pieces on display in the area, George and her students found an added resonance in the prompt, “What lifts you?” Students came prepared to tell their stories of hope and inspiration after a year that required plenty of both.

“These kids have done such a great job. Each student came up with unique ideas for a piece of the mural,” George explained. “They’ve really enjoyed being able to paint on the wall, and it’s given them a great way to get back into the swing of learning,” she added, noting that some students have come in to paint during recess, “It’s been such a great opportunity.”

When finished, the mural will be a permanent part of the Heritage landscape, a piece that commemorates the spirit of community and persistence that this crop of fifth-graders has captured so well.

“This has been a legacy project for our school,” said Heritage Principal Ryan Langdon. “This has been a chance for our students to capture and express who they really are, to share their identity with the rest of the school in a lasting and meaningful way.”

For students like Lamborne, the project was a chance to hone new artistic skills and offer a portrait of their own hopes, dreams and inspirations. She had the chance to present several facets of her own personality; in addition to the panel celebrating music, she was also able to pay tribute to another inspirational force in her life.

“I also painted Sonny, my orange cat,” she said, pointing to the image of a curious and colorful feline.