Before and After Care staff find “second home” in program

For thousands of families in the Cherry Creek School District, the Before and After Care program has been providing a safe place for students for more than thirty years. For many staff members, the program has felt like a second home for them, as well.

“We offer so much for students, but you don’t always hear about how this program has benefited our staff,” Director of Extended Child Services Sarah Conley. “We have many staff members who have been here for more than twenty years and it’s because they love this program.”

“You just try to be the best person you can be” 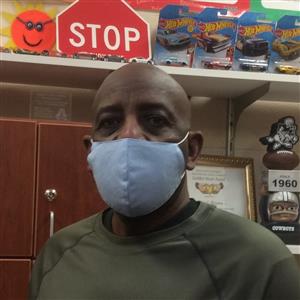 Danny Brown, the Before and After Care director at Black Forest Hills Elementary, is approaching his thirtieth anniversary with Cherry Creek Schools. What started as a part-time job has morphed into a lifelong career inspired by his students’ smiles. He has seen a lot of change over the years, but has noticed one thing stays constant.

“I started working with a typewriter,” Brown said. “That’s how long I’ve been here! And my greatest memories are when kids come back to visit the school and tell me how much they loved being here. That’s what we try to do...raise them with love.”

Brown’s approach was inspired by his own family. Raised by a single mother, his grandfather and a cousin, Brown knows he is lucky to have had a loving family and to have been raised valuing love, consideration and compassion. He doesn’t consider himself a role model as much as a positive influence and shies away from the word “hero” -- even when relaying the story of saving a young child’s life.

“We had taken a group of kids swimming and there was a younger girl there with her grandmother,” Brown said. “About an hour later, I noticed the girl was underwater and something didn’t seem right. I’m deathly afraid of water, but I just jumped right in and pulled her out and the lifeguard helped her. I was just glad to have been there for her that day.”

“It’s amazing what they can add to your life” 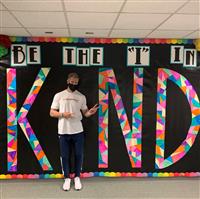 Eric Hallada, the Before and After Care director at Peakview Elementary, shares a special connection to the program. Hallada started working in the program at 16 as a part-time job, thinking it would be a nice “pit stop.” Twenty-five years later, Hallada credits Danny Brown for training him and said everything he loved on his first day is still true today.

“Children have this filterless attitude, an ‘I can do anything’ spirit and they’re constantly trying to grow,” Halleda said. “I am honored to be part of that process and hope they get even a third of what they give me every day.”

Hallada’s approach to working with students is to honor their emotions (as well as your own) and remember that though our childrens’ worlds are on a smaller scale, what they feel and experience is just as impactful. He shared that having been a safe space for students for Remote learning during the pandemic, he realized how integral his values have become.

“Our world can feel like it’s spinning off its axis right now,” Hallada said. “Our kids are worrying about the same things we worry about, and it’s so important to recognize and value that they face tests and challenges every day. Their world is on a smaller scale, but they feel the impacts so strongly. We must respect that.” 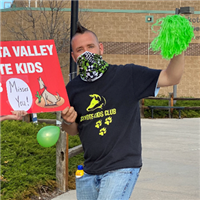 Will Karabell, the Before and After Care director at Dakota Valley Elementary, has been at the school for almost twenty years and says he knew what he wanted to do from a very early age.

“I was graduating kindergarten at Cimarron and got up on stage to say what I wanted to be when I grew up,” Karabell said. “I said I wanted to be a baby-sitter like my mom. My mom ran a daycare out of our home and I helped her out and loved it.”

Karabell, or “Mr. Will,” seemed destined to end up at Dakota Valley; he was a Skate City DJ and played the school’s first skate party night in 1999. He is proud of the second home he has helped create and works to ensure a safe space for his students, posting “No Judgement Zone” signs to encourage kids to find their authentic selves and celebrate who they are. He adds that working in childcare helped turn his life around, noting he had a phase where he was a bit of a “troublemaker.”

“I joke that I’m the best person to work with challenging kids because I was just like them,” Karabell said. “We stereotype boys and make assumptions about what they’re capable of. I was lucky to have the chance to learn how fulfilling it is to care for someone else.”