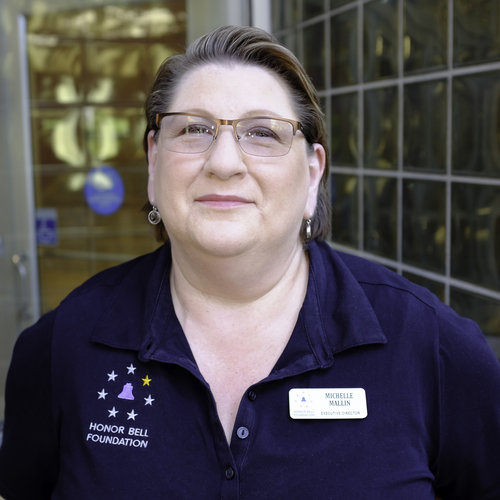 Michelle Mallin’s commitment and dedication has helped countless students in the Cherry Creek School District fully comprehend the meaning of service and sacrifice.

Mallin, who retired as the executive director of the Honor Bell Foundation in December, has played a key role in the district’s ongoing effort to recognize and celebrate veterans and active-duty military members in the local community. In her role with the Honor Bell organization, Mallin has helped ensure that the foundation’s namesake – a 1,000-pound bronze bell cast out of the personal artifacts of 12 fallen Colorado service members – serves as teaching tool for CCSD students, as well as a tribute to those who offered the ultimate sacrifice across the span of modern U.S. history.

“Michelle Mallin is a hero to the CCSD community because she has modeled to our students the meaning of service. She has inspired our kids; she’s shown us how our heroes have served others and served their country,” said Dr. Nickie Bell, CCSD’s Executive Director of Elementary Education. Along with Chief of Staff Chris Smith and Athletics and Activities Director Larry Bull, Bell has worked closely with Mallin to involve the Honor Bell Foundation with CCSD’s annual, districtwide Veterans Day celebration. “She has been committed to providing curriculum and learning for students that’s aligned with state standards, and that truly conveys information about the hearts and spirits of our American heroes.”

These efforts recently earned Mallin the Cherry Creek Heroes Award, an honor to designed to celebrate those who have committed an extraordinary action on behalf of the CCSD community. By working closely with teachers, administrators and students to give the district’s Veterans Day celebrations a sense of depth, meaning and importance, Mallin has helped build a tribute that has become a model for other districts across the state.

Those efforts align with Mallin’s broader dedication to the cause of veterans across Colorado and beyond. A founding member of the Honor Bell Foundation, Mallin has spent the past years meeting with countless veterans and their families. She was a driving force behind the creation of the Honor Bell monument itself, a stirring tribute to Colorado service members rendered of medals, awards and other artifacts of fallen heroes. In 2016, Mallin accompanied the newly cast Honor Bell as it toured the state, and she’s been an integral part of its journey since then.

According to veteran John Vargas, Mallin is a “patriot, a mother, a volunteer and innovator who pursues living with a ‘never, never quit’ attitude.” Her devotion persists, despite recent health concerns and her recent retirement from the foundation she helped create.

As a leader in the local veterans community, and now as a Cherry Creek Hero award recipient, Mallin continues to pave the way for students, teachers, administrators and civic leaders alike to discover the meaning of service, sacrifice and patriotism.