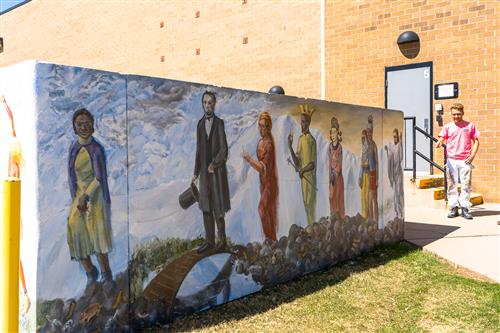 Diversity is a constant element in the story of the human race.

Our collective history features a vast cast of characters; it’s the tale of the progress, struggles and accomplishments of many individuals spread over a canvas of different cultures and continents over untold millennia. It’s also a source of fascination and perspective for Jake Sheykhet, an 18-year-old Grandview High School senior and an accomplished artist.

Sheykhet tapped into this interest when he was asked to design a three-panel mural for an outdoor structure at Mission Viejo Elementary. He worked with administrators, community groups and the PTO from the school to settle on a general theme for the outdoor painting, which would decorate the brick enclosure for a set of dumpsters near a set of exit doors. The mural would celebrate the diversity of the school and the community; it was up to Sheykhet to design a painting that would properly express that theme.

He settled on a design that went far deeper than Mission Viejo and its surrounding neighborhood, one that explored thousands of years’ worth of human existence.

“To me, there’s nothing more representative of our diversity than our history. We’re all a part of it,” Sheykhet said. “All of the cultures that have ever existed are a part of our shared history.”

With that truism in mind, Sheykhet began research for a piece that would bring together a procession of important figures pulled from across the span of human existence. He wanted to combine individuals from a wide range of cultures who collectively impacted the story of civilization across the globe.

More than six months after Sheykhet committed his initial vision to paper, his mural is near completion. Stretched across two walls of the structure is a line of luminaries from all different eras of human history. The lineup includes: Queen Nefertiti of ancient Egypt; Moses of the Old Testament; Laozi, founder of Taoism; Siddhartha, founder of Buddhism; the ancient Greek queen Artemisia of Halicarnassus; Cleopatra, another ancient queen of Egypt; Jesus Christ; Aisha, wife of Muhammed and the “Mother of Believers”; Wu Zetian, the only female emperor of China; Mansa Musa, 13th-century ruler of the Mali Empire; Italian Renaissance painter Artemisia Gentileschi; U.S. President Abraham Lincoln; and pivotal Civil Rights figure Rosa Parks. All of these figures hold a red string that stretches across both panels, a symbol of our shared line of history. On the far right of the first panel, the artist offered a self-portrait; a view of Sheyket’s back as he sets up the first segment of red string.

Sheykhet reserved the final panel for an image based a painting by French painter Henri Matisse, a picture of children dancing in shared joy and solidarity. This last part of the mural uses the historical figures as a springboard to shift focus to a future that’s both hopeful and celebratory.

The final product represents untold hours of planning, work and firsthand collaboration with the community. Before he formally started the design process for the mural, Sheykhet volunteered at Mission Viejo, teaching art classes and art history to students. Principal Andre Pearson wanted to Sheykhet to leave a more permanent mark on the Mission Viejo community, one that would last after he heads to Brown University next fall to study architecture.

“He had been doing some art classes for the last couple of years. Even during the pandemic, he was doing an online art class. He did a really good job; the kids loved it. He’s very motivated; art is his passion and he wants to help kids out,” Pearson said. “I said, ‘Jake, I want you to do something that’s more permanent, to memorialize your time as a volunteer.’ He came to our PTO meetings, our PASS meetings. He talked to parents. We landed on creating something that celebrated the history and diversity of our school.”

Pearson and the rest of the community were impressed by the final design that sprung from that simple theme, and in the fall, Sheykhet started the involved process of bringing that initial concept to life.

Over the course of months, he headed outside to work three to five hours on days when he wasn’t in class virtually or in-person. He experimented with different paints; he put his ability and his knowledge to the test, and in the process, he became a better artist.

“I think I’ve gotten better as the wall has gone on,” said Sheykhet, who began studying art at the age of 4 and progressed thanks in part to CCSD teachers at Challenge School and Grandview. “I’ve gotten a lot more comfortable with the paint.”

The process also offered Sheykhet the opportunity to interact with Mission Viejo students and teach them about both the artistic process and the figures who were coming to life on the small trash shelter near the playground. 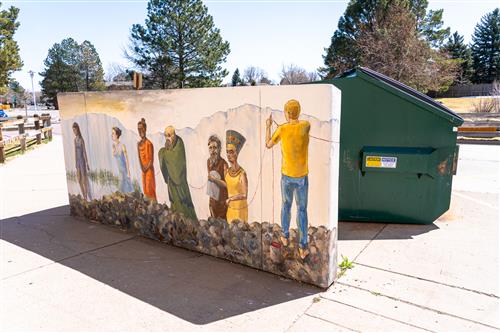 “I really love talking to students about art,” he said. “I think kids in general have incredible artistic intuition. They’re unfiltered; they’re not trying to be nice unnecessarily. They notice things that I don’t see, and it’s really interesting to see their interpretations. I enjoy hearing what they have to say about my work.”

The entire process has also offered Sheykhet the opportunity to offer a hopeful commentary about our shared future, even as it’s given him the chance to reflect on the past. Across the first two panels, the line of historical figures is walking across a landscape littered with trash, a commentary both on the physical location of the mural, and the environmental impact that the human race has had on its surroundings.

The dancing, hopeful children who dominate the final wall, however, are joining hands on an unsoiled field of flowers and greenery; the trash has disappeared, and the message points to a future where humans have found harmony with the natural world.

It’s a hopeful message, one that Sheykhet hopes will positively impact the school where he’s volunteered so much of his time.

“What you see on the wall is the synthesis of two of my biggest passions: art and history,” Sheykhet said. “A big reason why I do anything creative is to leave a mark and improve my community. In a small way, I’m doing that through this. It’s absolutely huge.”