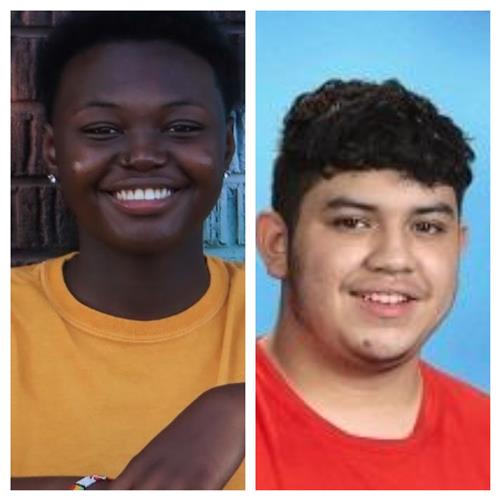 Both of the recipients of this year’s Rita Hellman AVID Scholarship exemplify the spirit of persistence, perseverance and resiliency.

According to Stacey Brandon, Interim AVID Director and the district’s Director of Equity, Culture and Community Engagement, both Hernandez and Koffi are ideal candidates for this year’s scholarship.

“Both Leslie and Kevin exemplify the ability to know what opportunities are out there and to persist in long-term goals. Both have aspirational goals, and that’s at the core of AVID,” Brandon said. “For us, what AVID stands for is what these students exemplify, that ability to be academically prepared and to have a mindset of resilience.”

Both Hernandez and Koffi say that their time in AVID has helped them develop a sense of perseverance, as well as a set of long-term goals.

Koffi, who started AVID classes when she was in middle school, said that the program’s emphasis on collaboration and academic preparation helped her identify and pursue broader ambitions. Specifically, Koffi has developed an academic plan that involves architecture and design; when she heads to college in the fall (Koffi is still debating between heading to the University of Kansas or Virginia Tech), she’ll start on a path toward creative and professional success.

“When I was six years old, I lived with my family in West Africa. I have an uncle who’s an architect, and he’s built whole neighborhoods. I just fell in love with the discipline; I was mesmerized,” Koffi said. “Ever since then, I’ve wanted to study architecture. I want to have my own firm – the first female, Black-owned architectural firm.”

The support and encouragement that Koffi has found at Overland High School and in the school’s AVID program have helped her find that tools that will eventually connect her with that dream.

“Everyone knows everybody at Overland; it’s a community,” Koffi said. “In AVID, you meet some of the most inspirational people from other cultures. It’s just amazing. I would definitely want my kids to go to Overland.”

Similarly, Kevin Hernandez found a sense of purpose and direction through the AVID program at Cherry Creek High School. When he was a freshman, Hernandez began working directly with Kelly Devitt, the school’s AVID coordinator, and he found a sense of inspiration in the prospect of pursuing higher education.

“She thought I was a good candidate for the program, and she said it would really help me overall. I really liked everything she presented to me,” he said. “The biggest thing for me was AVID’s focus on the college readiness aspect. As a first-generation college student, I felt like it was something I should really take advantage of.”

AVID has helped Hernandez persist through a year that’s offered plenty of challenges. Shifting to Remote learning in the wake of the COVID-19 pandemic took Hernandez away from the peers and the educators who had become such important sources of strength and inspiration, but he drew on the skills he’d picked up in AVID classes to make it through the year.

“I always feel like if you go in with the mindset that you’re going to do your best, you’ll succeed,” Hernandez said.

Now, he’s looking to his next academic steps at the University of Colorado Boulder, where he’ll pursue his passion for engineering.

“I love math, I love all the innovative aspects of engineering. Right now, I’m leaning heavily towards computer hardware engineering,” he said.

Hernandez and Koffi received $3,500 each in scholarship funds, money that will help both students turn their academic and professional goals into reality. According to Brandon, they’ve shown the kind of determination and focus that’s at the heart of the AVID curriculum, and the scholarship funds are bound to the first of many honors for both of these inspirational students.

“These students just show what possibilities can exist despite unprecedented challenges,” Brandon said. “They have an optimism, a faith in themselves and the world that fills you with a broader belief in humanity.”