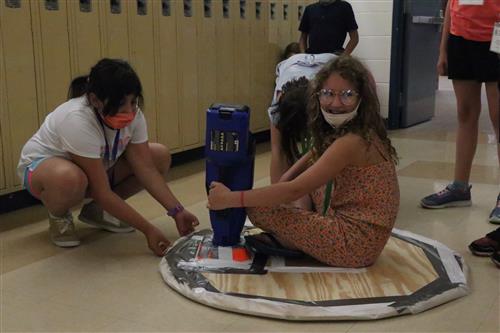 Kassie Weatherby had just cruised through a hallway at Horizon Middle School on a hovercraft built from a leaf blower.

It was only the latest in a series of extraordinary experiences that the 9-year-old had enjoyed at Inside Out, the summer enrichment program sponsored by the Cherry Creek School District’s Office of Gifted and Talented Services. For over 10 years, the Inside Out program has offered students from across the district a variety of summer classes and activities that stress critical thinking, creativity, collaboration and effective communication skills.

For Weatherby, who took part in all three series of classes during the month of June, Inside Out consisted of activities ranging from taekwondo to an immersive Spanish class. During the last week of the series, she was enrolled in “Expedition Mars,” a class focused on exploring the science and technology used by NASA in sending the Perseverance Rover to Mars earlier this year.

As part of that class, she joined her fellow enrollees in navigating a hovercraft constructed out of everyday materials by teacher Ryan Remien. The students worked in teams, pushing the hovercraft and its lone rider through the hallways as a way to convey lessons about physics, navigation and basic principles of STEM (Science, Technology, Engineering and Math).

For Weatherby, the class also encapsulated another benefit of the Inside Out program: the chance to meet new people and broaden her intellectual horizons.

“Inside Out has been really fun. I’ve been making new friends and meeting new people from different schools,” said Weatherby, who attends Dakota Valley Elementary during the regular school year. “This has been such a great experience,” she added, nearly out of breath from her exciting journey on the homemade hovercraft, “I would recommend this to any student!”

According to Nannette Almon, Twice Exceptional Coordinator for CCSD and Inside Out administrator, the fee-based program has long stressed that combination of offering classroom enrichment and building social ties for students. Those goals seem even more important this summer, as students and teachers alike seek to recover from a year full of profound challenges and changes.

“It’s so nice for students and staff to be face-to-face again,” Almon said, adding that the Inside Out staff has been particularly attentive to safety regulations and guidelines regarding COVID-19 in the lead-up to the summer series. “Parents have also been saying how grateful they are to have this program this year. It’s been so great to see the cooperative learning and collaboration between students and teachers that has come out in the classrooms.”

Almon added that the enthusiasm for the program has come through in the numbers of students and teachers who signed up for the three-week series. Around 50 staff members signed up for the 2021 Inside Out program, and around 800 students signed up for courses ranging from chess camps to printmaking to sports and a whole slew of STEM-based explorations.

“It was such a great turnout considering all of the unknowns,” Almon said. “Initially, we were concerned about having enough interest, just because of the year that everyone has been through. We are pleasantly surprised that we ended with a whole number of return staff and a really healthy number of brand-new staff this summer.”

The shared enthusiasm between teachers, staff and students alike has allowed a return to the fundamental values of Inside Out, she added.

“This gives students a holistic approach to continuing to use their minds during the summer. It combines content areas and continues to develop critical thinking, problem-solving and creative skills,” Almon said. “It’s something different from what they receive during the regular school year.

“It’s a program I look forward to each year,” she added.