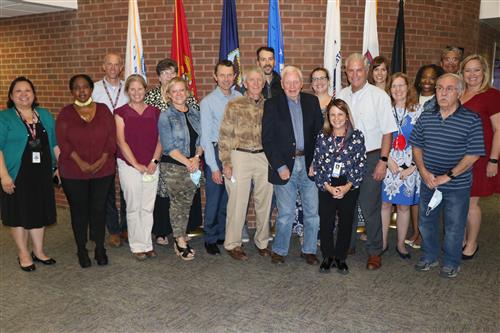 The Cherry Creek School District consisted of only a handful of buildings when Dr. Paul Tschetter moved to the area and started his pediatric practice.

A high school, a couple of middle schools and less than ten elementary schools made up the district that would eventually span 108 square miles and include dozens of buildings. Tschetter would have a unique perspective of the extraordinary growth and development of CCSD over a span of nearly 50 years, and he’d play a unique role in ensuring the health, safety and happiness of thousands of students.

Tschetter’s pediatric practice would continue for 49 years, and his investment, commitment and professional expertise would benefit of students across the Cherry Creek School District. As he served children across the Denver metro area through his Centennial-based practice, Tschetter also played a direct role in the evolution and growth of CCSD. He served as chair of CCSD’s Medical Advisory Board, and remains a member; he served on the district’s curriculum committee and its special education committee. His own children and grandchildren attended schools in the district, and for decades, he worked to ensure that they and every other student in CCSD had the resources they needed to excel.

That impressive resume of service and commitment recently earned Tschetter the Cherry Creek Hero Award, an honor designed to recognize those in CCSD who offer extraordinary actions on behalf of the entire district. Tschetter received the award during the Oct. 5 meeting of the district’s Medical Advisory Board, where current members took turns praising Tschetter’s professionalism, his commitment to students and his skill as a physician. Deputy Superintendent Dr. Jennifer Perry was also on hand to formally present the award and praise Tschetter’s decades-long stint in CCSD.

“You were a founding member of this committee, and you’ve served for over 50 years,” Perry said. “I value institutional knowledge, and I just can’t imagine the stability you’ve provided as the district has grown and changed. You’ve served tens of thousands of students.”

Members of the committee and CCSD administrators alike were quick to point out how that service impacted their own children. CCSD Chief Health Officer Michelle Weinraub recalled that when she moved to Colorado with her family in 1998, family members immediately recommended Tschetter as a pediatrician.

“Thank you for taking care of every one of my kids since the day they were born,” Weinraub said.

Tschetter offered his own reflections about his decades of service to CCSD and the broader community. In nearly 50 years of his practice, Tschetter said, he “didn’t have any bad patients.” He took pride in his work with CCSD, and in playing a role in the district that served so many. He also added that he's attended more than 400 district football games over the years.

“It’s a good feeling to know that you are contributing,” Tschetter said. “This is meaningful and special … Life is not a destination, it’s a journey (and) every day is a blessing.”

Dr. Leon Greos, who currently serves as chair of the committee, said that Tschetter’s skill as a physician stems directly from his personal traits.

“He’s a great pediatrician because he’s a great human being,” Greos said. “It’s always enjoyable to listen to the tales he has to tell.”