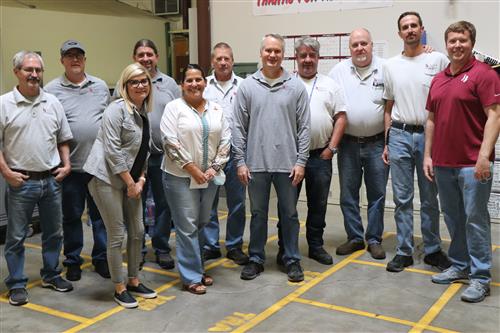 Greg Von Feldt is part of a team, and he insists that everyone knows.

Von Feldt, the manager of the CCSD’s central warehouse, played a central role in averting a crisis at Cherry Creek High School. According to CCHS administrative assistant Sharon Webb, the school nearly kicked off the 2021-22 year with a serious problem: thousands of student planners that the incoming freshman class relied on for academic success weren’t going to arrive by the first day of school. The 4,000-pound pallet containing the planners was stuck in transit somewhere in the Denver metro area; because of staffing shortages within the freight company, they couldn’t guarantee on-time delivery.

That’s when Von Feldt stepped in. Along with colleagues Chad Purcell, Greg Klotz and the rest of the warehouse crew, Von Feldt organized the pickup and delivery of the planners to CCHS before freshmen reported for the their first classes.

“I cannot think of a more heroic action,” Webb wrote. “Greg and his team graciously went to work for us and clearly SAVED THE DAY.”

This dedication and selflessness recently earned Von Feldt the Cherry Creek Heroes Award, an honor designed to recognize those in CCSD who commit extraordinary actions on behalf of the entire community. CCSD Assistant Superintendent of Educational Operations Dr. Nickie Rivale-Bell traveled to the warehouse on Oct. 8 to present Von Feldt with a formal plaque and a formal recognition of his honor.

Von Feldt, however, was insistent that the credit be shared among the entire crew at the facility.

“This is a team, and this honor is for the whole team,” Von Feldt said. “We operate together. Warehouse, printing – all of us. It’s a team, and I’m just part of it.”

That team was on hand to hear Von Feldt share his appreciation. Dozens of employees from the warehouse surrounded Von Feldt as Rivale-Bell thanked him for his commitment, service and dedication. They were there to support Von Feldt, and ultimately share in the gratitude he received from a thankful district and a thankful CCHS community. Because of them, thousands of freshmen started the year with the tools they needed to organize, plan and approach their academic year properly.

“Thank you to the CCSD Warehouse crew – you are the best!” Webb said.