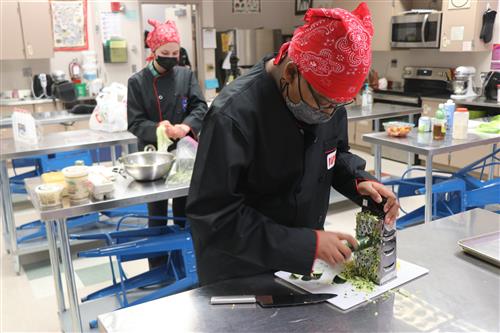 Until a few months ago, Ian Nelson’s experience in the kitchen was mostly limited to eggs, omelets and a few other simple breakfast dishes.

The Eaglecrest High School freshman’s interests were rooted much more solidly in the worlds of science and music than in cooking or cuisine. Nelson is the first to admit that at the beginning of his journey through high school, he had very little in the way of culinary ambition.

That changed with the prospect of designing meals fit for astronauts. At the beginning of the school year, Nelson signed up for the school’s NASA HUNCH Culinary Team, a group that competes with other high school students from across the state and the country to create food for astronauts bound for the International Space Station.

“I can’t say that I’ve cooked much before I started in HUNCH, but I think that this program has really helped get me into cooking,” Nelson said before the formal kickoff of the HUNCH cooking contest held at Grandview High School on March 1. “Honestly, I’ve always loved astronomy in general, so being able to cook for people who are going to space is something wonderful. It’s very interesting.”

Along with his teammates (this year, the combined Cherry Creek School District team comprises six Eaglecrest students and one Grandview student), Nelson has spent the past few months building up his culinary expertise to build a menu with very specific requirements. Specifically, students involved in the competition had to build a three-piece menu – an entrée, a side and a dessert – designed specifically for astronauts who are in quarantine before they head to space.

The CCSD team’s menu featured a chimichurri chicken salad with fresh vegetables and lentils as an entrée; winter vegetable curried fritters as a side; and a “better-for-you” Greek yogurt banana split with frozen raspberry bombs and bananas brulées as a dessert.

According to Mary Anderson, the director of NASA HUNCH culinary program for Cherry Creek Schools, this rubric was a challenging departure from previous years, when competitors were charged with only a single dish.

“Typically, we produce one item, whether it’s a dessert, an entrée or a side, for consumption aboard the International Space Station. This year it’s an entire meal for the astronauts in quarantine. We wanted to provide them with the freshest produce and ingredients available,” Anderson said. “That said, we had to pay really close attention to our nutrient content.”

Those modified guidelines came after HUNCH organizers worked to keep the program going, even as the COVID-19 pandemic sidelined the annual contest and tweaked the dynamics of the competition. Last year, for example, CCSD students weren’t able to compete against other students from Colorado, and instead showcased their dishes by themselves for a panel of 10 judges. What’s more, this year’s district team was a combined group of Eaglecrest and Grandview students, while past years have seen a separate team from each school.

“What is a little bit different is on the NASA side of things is that they had fewer teams participating this year because there is such a big push in education to catch up for lost time,” Anderson said. “We really wanted to make sure that we’re supporting the program regardless of what we have to do to catch up. That means everyone is working twice as hard to get it done. We’re all on board to do that.”

That effort has meant the world for students like Nelson, who’s committed to continuing his work with the HUNCH program as he continues through high school. He’s even thinking of ways he can incorporate the lessons gleaned from the project with his other favorite subjects.

“I’m a musician. Recently, I’ve been listening to a lot of space-related music, and I think that’s fascinating,” he said. “Eventually, I’d like to make my own music, maybe somehow related to space in a way.”

As Nelson and his teammates prepared to present their menu to a panel of judges – a group that included biomedical engineers from NASA, as well as honorary experts from across the district – the new chef didn’t seem nervous. Even though he’d been cooking formally for a relatively short time, and even though his food would be compared to other teams from across the metro area based on components like taste, texture, aroma and appearance, Nelson seemed calm, collected and ready to compete.

“The first time walking in that door, I was pretty nervous, because I didn’t know anyone except for one of my good friends,” he said, gesturing to the Grandview classroom that featured all the components of a professional kitchen. “Honestly, now I don’t think there’s much pressure among the schools. I think we’re all here to cook and have a good time.”

After all, that’s what cooking, science and space exploration are all about, he added.