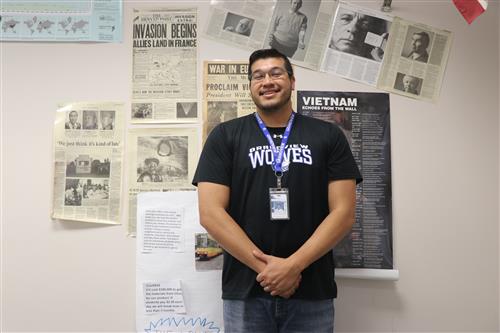 Carlos Nevares summons the wisdom of Mark Twain when he talks about his approach to teaching history at Grandview High School.

Nevares, who started as a social studies teacher at the school last spring, encourages his students to look for similarities in politics, social movements and ethnic conflicts across centuries and across geographical areas. He quotes one of Twain’s best-known quotes about recognizing the broad patterns of human behavior: “History doesn’t repeat itself, but it often rhymes.”

In his relatively short time as a teacher (he graduated from the Metropolitan State University of Denver in 2020 and started his first full academic year as a social studies teacher at Grandview this fall), Nevares has worked hard to help his students make those connections between what’s come before and the current state of the world. Nevares, who served for seven years with the U.S. Marine Corps before beginning his studies at MSU, has clearly had a profound impact as an educator and a scholar, one that’s been recognized outside of the walls of Grandview.

Nevares recently won a competitive spot in the Auschwitz-Birkenau Memorial Foundation’s Fellowship, a program for educators designed to deepen the approach to teaching the history, context and larger lessons of the Holocaust. As an ABMF Fellow, Nevares will travel to Poland this summer for an immersive, weeklong visit to the site of the former Nazi concentration camp where thousands perished during World War II.

Along with about 40 fellow history and social studies teachers from across the U.S., Nevares will have rare access to the historical site during an educational program designed to support the Foundation’s larger mission: to safeguard the memory of Auschwitz-Birkenau through the preservation of its original artifacts and through supporting the education of American students regarding the horrors of the Holocaust.

For Nevares, the fellowship offers a valuable and meaningful opportunity to deepen his approach as an educator, and to bring a new degree of depth to Grandview’s social studies department.

“This is an amazing opportunity. I’m so humbled by this; to receive this honor so early on in my teaching career, to have this firsthand experience to bring back … it’s just going to make my teaching and my students’ learning of these subjects so much more meaningful,” Nevares said. “It will further expand my approach in the classroom; it will make my lessons better.”

For Nevares, the opportunity to visit the physical site of the camp will offer a degree of context and firsthand experience that will help him convey the true depth of the camp’s atrocities to his students. He’ll also be able to make connections between the lead-up to one of the worst humanitarian tragedy in human history to current events.

“I won’t just be talking about a concept. I won’t just be talking about something that we’ve all read about. I will have seen the camp. I’ll see where the train tracks were, where the barracks were, where the crematoriums were,” Nevares said, adding that every day of the weeklong trip will include intensive educational programs designed for teachers. “Every day of the trip has a specific itinerary … I’ll get resources so I can teach this subject correctly, so I can illustrate that these atrocities didn’t just come out of nowhere.”

Nevares sees his role as an educator as a form of service, a value he knows plenty about from his time in the U.S. Military. Nevares spoke about the ties between his service as a U.S. Marine and his goals as a history teacher during an interview with an MSU publication.

“In the Marine Corps I was entrusted with the personal and professional development of young men and women,” he said. “That mentorship aspect of being a Marine was extremely rewarding to me, so I thought the natural job field I should pursue was being a high school history teacher.”

In his role as a Fellow with the Auschwitz-Birkenau Memorial Foundation, Nevares will continue that mission of service, even as he brings prestige, expertise and historical understanding to the Grandview social studies department.

“I am so proud to represent Cherry Creek Schools and Grandview High School on the international stage,” he said. “This fellowship helps the entire department, the entire school and district. I’m so glad that I can bring accolades to the school. During my first year as a teacher, they’ve helped me so much, and this is my chance to pay it back in kind.”

The trip will also be a chance to find the rhymes that emerge so often in the study of history, and to help students understand the worst mistakes of the past so they’re never repeated.