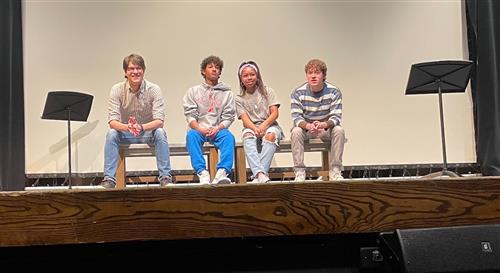 Rejection can be unsettling.

Being turned down for that dream job, getting a polite “no, thank you” from a prospective romantic partner, having the application to your top school passed over – no matter the form, being rebuffed is never a pleasant experience. For some, it can be downright scarring.

Cherry Creek High School senior Riccardo D’Urso wanted to explore some of those themes in “They Stole the Moon,” an original play that started as a project for his creative writing class. The play features two characters interacting months after a brief romantic entanglement. One of them can’t seem to get over how the relationship ended; the other tries to explain why it didn’t work, sometimes exasperatedly.

For D’Urso, the story of a guy who just couldn’t seem to get over a failed relationship stemmed from personal experience, as well as input he received from friends. He wanted to show just how much rejection could sting, and also offer a hopeful note about recovery and perseverance.

“It’s hard to take a no. It’s hard to be rejected, not even necessarily with something romantic. I’ve seen people going through similar experiences with jobs, or with friends. I decided to explore that in this play,” D’Urso said. “I had a couple of messages that I wanted to convey. I really wanted to express the fact that you never know if someone is going through something. Also, I wanted to convey that it’s never too late to take a positive message from a negative experience.”

The message of D’Urso’s play resonated with the judges for the Denver Center for the Performing Arts’ 2022 High School and Middle School Playwriting Competition. “They Stole the Moon” was one of three winners of the annual contest, which seeks original, one-act plays from students across the state. CCHS senior Kavery Kallichanda’s original play “Of Yarn and Stars” also won a spot in the top seven out of a field of 135 submissions.

As one of the three winning playwrights, D’Urso earned a unique honor: a professionally staged reading of “They Stole the Moon” was part of the lineup at this year’s New Play Summit at the Denver Center for the Performing Arts. What’s more, D’Urso received $250 in prize money, and his creative writing teacher Marissa Voss received $250 to purchase books or other teaching tools for her classroom.

D’Urso said that the reading at the DCPA drew a large crowd, and that the event gave him the chance to interact with a professional playwright about the elements of effective drama and the craft of creative writing.

A reading of the play also took place in the fine arts auditorium at Cherry Creek High School shortly after the New Play Summit. Actors took to the stage for a packed crowd of D’Urso’s peers and CCHS teachers and staff; the performance had the feel of a celebration. The outpouring of support from the school community was moving for D’Urso, who came to Cherry Creek High School as a freshman speaking little English. Recently arrived from his native Italy, D’Urso’s high school experience involved a good deal of learning and adjustment outside of the classroom. Four years after he arrived in the U.S., D’Urso penned a play that DCPA judges praised for its “powerhouse” dialogue.

“I read English very well, but I didn’t speak it. After a couple of months of being at Creek, I got a lot better,” he said. “If I’d decided to write this freshman year, it wouldn’t have been as accurate. With all the experiences I had, it was pretty natural.”

D’Urso has learned just how effective creative expression in all forms can be in dealing with emotions and experiences, both good and bad. A dedicated musician as well as a writer, D’Urso said the positive feedback he garnered from his first attempt at drama has shown him the value of working in new mediums and taking risks.

“This whole experience made me realize that I’m a good enough writer that I can do it, and keep doing it. It’s something I can use to keep going,” he said.