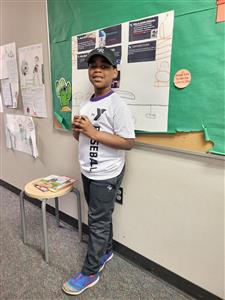 Jackie Robinson, Dwayne “The Rock” Johnson and Ruth Bader Ginsburg were among some of the leaders represented this year at Eastridge Community Elementary School’s annual second-grade ‘wax museum’ project.

Students begin the project by discussing what a leader is and what qualities leaders should have. They discuss as a class and with their families who they consider to be leaders and choose someone to research and represent at the wax museum in costume with a prepared speech.

“The students are learning about biographies and how to understand non-fiction,” second-grade teacher Natalie Sterkowicz explained. “They use books, videos and other resources to research their leader and have to be able to explain with evidence what makes this person a true leader.”

“Jackie Robinson was the first African-Ameri 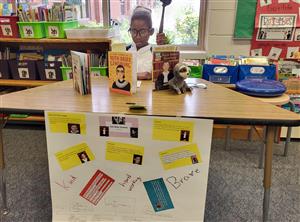 can to be in the baseball Hall of Fame,” Clements said. “I researched and worked on my poster to show he is a leader.”

“She was a famous leader who was on the Supreme Court,” Faegins said. “When I first learned about her, I was so interested I couldn’t take it! Tonight, when I get home, I want to learn more.”

Gael Garnica Cardenas, a second-grader who chose Dwayne “The Rock” Johnson, explained that leaders should give back.

“I chose ‘The Rock’ because he can help the world,” Garnica Cardenas said. “He set up a foundation and donated money so he could help people who needed it.” 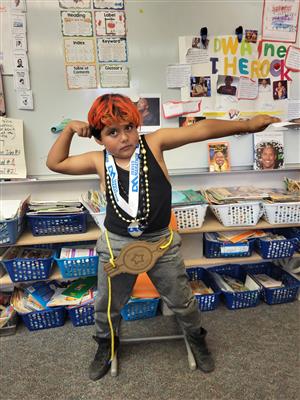 Second-grader Narangoo Batbolor chose Kamala Harris because she is the first female Vice President of the United States.

“She is hardworking and thoughtful,” Batbolor explained in her presentation. “She is known for speaking her mind and asking hard questions.”

In addition to learning how to research and evaluate information, the students also helped to support each other. Sterkowicz shared that she is always impressed by her students, who worked together to find the costume pieces that they needed. For example, one student wanted to wear a hijab, so one of her classmates brought one from home. 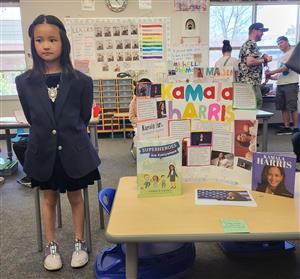 “The students were so excited about this project,” Sterkowicz said. “They wanted to share what they learned with others and have been saying that they want to be more like their leader, whether it was hardworking or inspirational or kind. I like to think an Eastridge student might go on to be a leader that gets represented in this museum one day!”