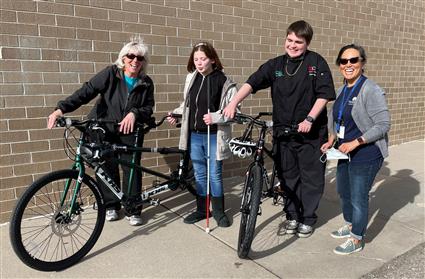 The bikes were recently purchased by Cherry Creek Schools through the district’s Medicaid department. The Medicaid program allows the district to get partially reimbursed for health and medical services provided at school to students who have an Individual Education Plan (IEP) and are on Medicaid.

Flores and Lay were the winners of a naming contest for the bikes: Flores named the green tandem “Cricket” and Lay named the black tandem “The Black Pearl.” Flores, a freshman at Eaglecrest, was initially skeptical of the bicycles but gave them a try, anyway.

“When I rode on the tandem bikes, it was wobbly and I was afraid I might fall,” Flores shared. “But luckily Mrs. Jeannie helped me and it wasn't that bad.”

Flores, who uses Braille and tactile materials, is grateful for the support at her high school to help her graduate and find a job.

Lay, a senior at Eaglecrest, was excited for the new opportunity and loves trying new things. Lay receives additional support, such as one-on-one time during his off periods, as well as a paraprofessional who supports him in the classroom. After graduation, Lay hopes to begin an apprenticeship for culinary arts to become a chef.

“I believe people look at people with disabilities differently, and don’t often give us a chance,” Lay explained. “We like trying new things and doing what other kids do, we just need extra tools.”