Aloysius Becker made a simple discovery when he tried choir for the first time.

“I developed a love of singing this year,” said the Laredo Middle School seventh-grader. “It’s fun and I like it.”

In fact, Becker found that he liked choir so much, he decided to audition for the Cherry Creek School District Middle School Honor Choir last October. The competitive audition process included sight-reading, aural recall, scale-singing and performing a solo. When it was over, Becker was among the 134 seventh- and eighth-graders from middle schools across the district who were selected for the elite group.

“This is the best of the best across the whole district,” said Tegan Palmer, the choir director at Campus Middle School. She explained that the students selected for honor choir were given five pieces of music to learn on their own during the fall and winter. Then they had two days of rehearsal with guest conductor Jim Farrell. 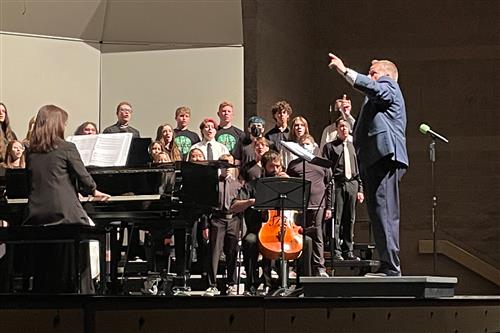 Farrell, who has been directing choirs for 40 years, retired from Littleton Public Schools in 2019. He has taught at both the high school and the university level, and many of his students have performed in Hollywood and on Broadway and gone on to careers as performers and educators. Farrell met with the Honor Choir students on May 6 and 7 at Grandview High School.

“Clinicians are always helpful to our students because they give the students a different set of eyes and ears, a different set of tips and techniques,” Laredo Middle School Choir Director Richard Clark said. “It’s really important to them because it helps them to grow.”

“I think the songs are really cool and I’m excited to perform,” said Hazel Mockton, a seventh-grade student from Campus Middle School. She and fellow Campus student Alysse Wilcox were excited about the chance to perform challenging works with other students who are also passionate about choir.

“I wanted to be part of a choir with people who wanted to sing and really cared about it,” Mockton said.

Enjoy highlights of the concert in this video.

Now in its fifth year, the CCSD Middle School Honor Choir program recognizes the district’s most talented and hardworking seventh- and eighth-grade vocalists and gives them an enrichment opportunity to work toward musical excellence.