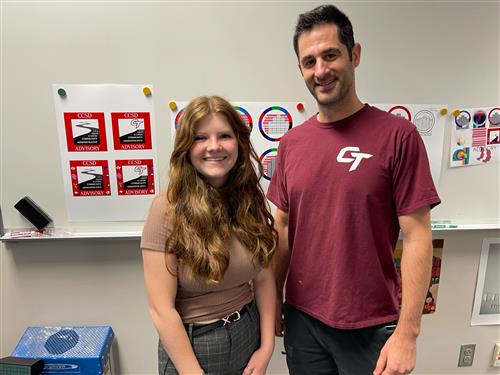 Madisyn Fantauzzi will have plenty of real-world experience to draw from when she begins her studies in graphic design at Brigham Young University-Idaho in the fall.

Fantauzzi recently received her high school diploma from Cherokee Trail during May’s commencement ceremonies. Before she walked across the stage to cap her high school career, however, Fantauzzi had the chance to leave a lasting mark on the Cherry Creek School District, even as she honed skills that will serve her in a future career.

During the 2021-22 school year, the district commissioned Fantauzzi to design a logo for Advisory, a student group that now operates in all CCSD high schools. The Advisory groups in the high schools foster conversations between students, administrators and staff in order to enhance the climate, culture and health and wellness across the buildings.

To create awareness about the Advisory groups that now function in all CCSD high schools, the district wanted to create a logo that summed up the program in a visual way. They wanted to convey the five elements of the Advisory program’s mission: social-emotional learning, community building, equity, academic support and administrative support. These echo the district’s core values of teaching the whole child; focusing on mental and social/emotional health; cultivating relationships; equity and engagement; and building a growth mindset.

After putting out a call to graphic design students throughout the district, administrators tapped Fantauzzi for the job, due to the strength of her work in graphic design classes at Cherokee Trail and her interest in the topic.

“It was pretty open. They said, ‘Here’s what Advisory is. We want to give it a branding for people to see,” Fantauzzi said. “I started off with pretty broad ideas.”

For Fantauzzi, the commission turned into the perfect preparation for professional work in her a field that’s become her Pathway of Purpose. She created a group of initial designs, worked with administrators to choose a final candidate and incorporated their feedback to hone and change her initial idea.

“It was good experience for what I’m going to be doing in college and later on in life,” Fantauzzi said. “It was helpful hearing from everyone and being able to guide the design from that … It’s prepared me a lot. It’s given me a chance to have these meetings that feel very official; it’s given me the chance to experience what it would be like if I were actually making a logo for companies.”

Jeffrey Garland, Fantauzzi’s visual arts and graphic design teacher, wasn’t surprised by her success. Her skills showed from her first work in the medium of graphic design, he said; Fantauzzi easily picked up the subtleties and nuances of working in programs like Adobe PhotoShop and InDesign to create unique and visually compelling pieces.

“It was this chance to gain a real-world opportunity, and when I got the email, she was the first name on my list,” Garland said. “Every assignment she’d done in class spoke to me. This was for her.”

Garland’s instinct proved correct, as Fantauzzi successfully navigated the demands of a whole group of administrators to create an image that sums up the mission of Advisory. Her graphic features a winding road, one that symbolizes each student’s separate Pathway of Purpose and unique needs when it comes to guidance, success and insight.

The fact that this image will sum up Advisory long after Fantauzzi has left the district offers its own sense of reward and accomplishment.

“It’s so weird and cool,” she said. “When Advisory comes around next year, I’m going to write my friends and see if they’ve seen my logo. It’s so great to think that I’m leaving a footprint at the school and in the district.”