August 11 was the ninth day of band camp for members of the Cherry Creek High School Marching Band. It was also the ninth day of 90+ degree temperatures as the students worked outside to hone their marching and music skills. There were frequent water and sunscreen breaks, but surprisingly few complaints.

“Coming in two weeks before school starts to be here for like eight hours in the heat – it’s something most people wouldn’t choose to do,” laughed Megan Wijaya, a CCHS senior who’s in her fourth season with the marching band and serves as captain of the woodwind section. She said the time, effort and sweat the band members invest are well worth it. “The long hours we work and how hard we work - that really creates a close bond between all of us. I just really love what we do and it’s awesome to have the kind of community that we have here.”

Fellow senior Parker Walsh agrees. This is also his fourth year in marching band and he’s now brass captain. He said as a freshman, he was hesitant about joining an extracurricular activity that required a significant amount of time and commitment. However, his friends encouraged him to give band a try.

“I was kind of unsure about it,” he said. “But after my first season, I realized it was just such an amazing experience! You make such a community with the people around you and you can really dedicate yourself to something.”

That sense of community was disrupted by the COVID-19 pandemic. During the 2020-21 season – sophomore year for Wijaya and Walsh – their practices were impacted by COVID-19 restrictions and the state marching band championships were cancelled. The experience changed many band members’ perspectives.

“After COVID, we really came to appreciate being able to meet with each other and to work as a group,” Walsh said. “I think that really brought everyone together and really changed how we do things.”

“It really taught us as a band what we needed to focus on coming back,” Wijaya added. “There were a lot of traditions and habits that we lost over that year, so it was kind of a fresh start last year when we did come back.” 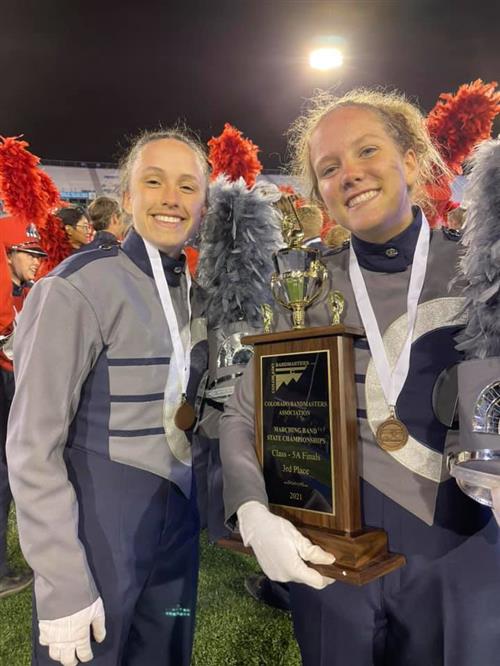 And come back they did. At the 2021 State Marching Band Championships, the Bruin Band took third place, the highest they had placed in years.

“We learned we can have fun, but we can also achieve greatness and excellence,” Walsh said.

The quest for greatness and excellence continues this year, with a competition show that recognizes some of what the students have experienced during their high school years.

“We felt that coming out of the last two difficult years we needed a positive theme with a message of inclusiveness and positivity,” Band Director Tim Libby said. “With the amount of negativity and divisiveness in our lives, we thought a perfect theme would be ‘What the World Needs Now is Love.’  All of the music selections in the show, as well as the visual design, express this theme.”

Walsh and Wijaya are looking forward to spreading a little love through their senior season and continuing to contribute to school spirit during performances at pep rallies and football games. After high school, Walsh plans to study biochemistry in college and pursue a career as a research scientist, while Wijaya plans to study biomedical engineering and wants to work with prosthetics or organ transplants. While neither of those careers relate directly to music or marching band, both students say they learned valuable skills in band, things like commitment, time-management and teamwork – which they believe will help them in their future endeavors.

But for now, the focus is on the season ahead and, of course, the state marching band championships.

“The more we put into it, the more we get out of it,” Wijaya said.

“We couldn’t be more proud of the hard work the students have put in these last two weeks of band camp,” Libby said. “They are on track for a great season, and we can’t wait for our first performance at the Western Welcome Week Parade on August 20!”