Unified Sports join people with and without intellectual disabilities on the same team. The Smoky Hill team is a co-op team made up of students from Smoky Hill, Grandview, and Eaglecrest. Some of the students have special needs and some do not.

The concept of Unified Sports was pioneered by Special Olympics as a way to promote inclusion, break down stereotypes about people with intellectual disabilities, and empower people with and without intellectual disabilities to engage through the power of sports. Those ideas align perfectly with the Cherry Creek School District’s Core Values of Growth Mindset, Equity, Whole Wellbeing, Engagement, and Relationships. 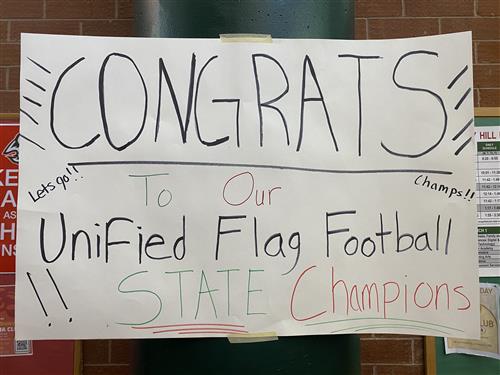 This was the first football title of any kind for the Smoky Hill, and Head Coach and Unified Coordinator Kelton Coppinger said it was a big accomplishment for the kids.

“It’s a big deal for these kids, as we’ve only had a flag football program for three years,” Coppinger said. “Most of these kids don’t get the opportunity to play other sports, other than unified sports, so they’re pretty excited. We’ve had lots of people congratulating us, and we had the championship parade through the school. This is something they’ve worked really hard on this year.”

Smoky competed with three other teams in their designated division (based on a similar competitive level) on Oct. 29. Teams play five-a-side during games. Over 40 teams across several divisions participated on some 15 fields at CSU. 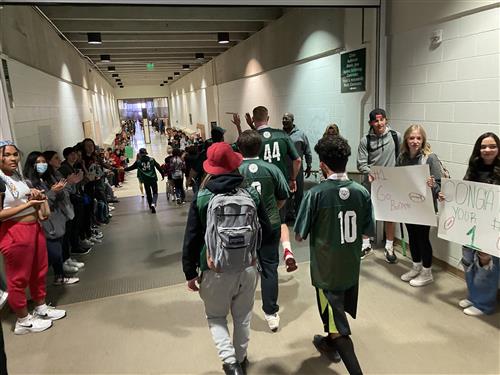 A standout player for the Buffs was senior Ismael Shah, who also plays unified basketball. He helped lead Smoky Hill to the flag football title.

“I thought it was incredible,” Shah said. “It’s our first flag football title and I wouldn’t have done it with a better team. I thought it was an amazing accomplishment.”

The Smoky Hill community gathered on Nov. 7 for an indoor parade through the school to honor the club. Students and staff members lined the school hallways and cheered enthusiastically as the champions – proudly wearing the gold medals they earned – passed by, smiling and waving.

The significance of the event was not lost on Coach Coppinger.

“There’s been excitement the whole last week since we won,” he said. “We’ve had lots of people congratulating us, and we had the championship parade through the school. It’s a really big deal for the kids. This is something they’ve worked really hard on this year.”

Shah says the parade was very important to the team.

“I just hope unified flag football continues to be recognized, like it was today,” he said. “I just want it to keep going and it’s important how we were recognized today for our sport.”