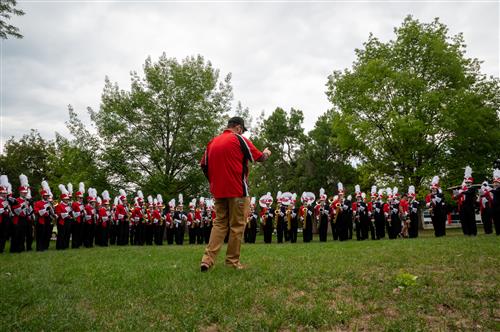 For the past 14 years, Jason Mabrey has literally been changing the lives of Eaglecrest High School students for the better, in myriad ways, big and small.

“He does so much that we don’t notice,” said EHS senior Koga Kadota. “He has high expectations for all of us.”

“He’s everything. He’s the biggest mentor I’ve ever had,” said fellow senior Kyler Colip of the EHS band director. “He’s been like a second father to me ever since I joined the band.”

“The band” is the Eaglecrest High School Marching Band, which has gained a reputation for excellence and become a popular presence at school and community events, including the Southlands Hometown Holiday Parade and the 9News Parade of Lights.

On Nov. 9, under the bright lights at Legacy Stadium, the 180 members of the Raptor Band performed their 2022 field show for the last time.

“Mark time, hut! Everybody should be having good horn angles tonight.”

Mabrey’s voice on the loudspeaker was alternately authoritative and hilarious as he guided the group through their music and marching maneuvers, often with his signature phrase "Heck yeah!"

“How about the socks? Heck Yeah!” he laughed as he joked with some students about their lack of proper footwear during rehearsal.

The Raptor Band’s “Friends and Family” performance was the culmination of months of hard work and dedication that began with band camp in June and continued through holiday parades in December.

“There are times when I’m with these kids more than they’re with their parents,” Mabrey said. “We spend so much time with them in an area that is different. We’re talking about putting your heart into things and listening, engaging, emoting, and doing something beautiful. I think that allows us to connect with the kids on a different level than I probably could if I was a math teacher.”

Students and parents alike say Mabrey is an exceptional educator who truly does connect with his students. They say he exemplifies the Core Values of the Cherry Creek School District, particularly Relationships.

“He treats all of us like we’re his own kids. He knows all of us very well on a personal level,” said Colip, who is one of the band’s three drum majors.

“We’re his students first, and his friends second,” added Jeffery Barstad, an EHS senior and trumpet player who’s been in the Raptor Regiment for five years, starting as an eighth-grader. “We’re a family.”

Mabrey wants the band to feel like a family, where everyone is welcomed, accepted, and supported. He believes that a sense of belonging is essential to his students’ wellbeing and success in both school and in life.

“The things we teach in band are life skills,” Mabrey said. “It’s being on time, it’s being responsible, it’s being a part of something that’s bigger than yourself.”

“He’s taught me a lot of life lessons,” Barstad said.

“I feel really prepared for college after what he’s taught me,” Colip added. “He’s helped me become a better student in school. It’s impacted me everywhere in life.”

The Raptor Band’s Friends and Family performance was bittersweet, as it was one of the last times this particular group of students made beautiful music together. It ended with special recognition for the group’s seniors, passed out with handshakes and hugs from Mr. Mabrey.

“He holds the kids accountable, but he loves them at the same time. He is fantastic, he’s wonderful,” said band parent Marlo Barstad. She believes Mabrey has had a lasting impact on her son. “I’m pretty sure that Jeffrey’s high school career would not have been the same without marching band. It’s helped make him who he is today."

Watch for the Eaglecrest High School Marching Band in the Southlands Hometown Holiday Parade on Nov. 19 and the 9News Parade of Lights on Dec. 2-3.