When Smoky Hill High School’s campus administrator Cary Reed began the 2022-23 school year, he wanted students to be empowered to resolve conflict in ways that would mean fewer suspensions and more students in class.

One of the main ways Reed wanted to help empower students was by connecting them to resources in their building. Reed designed and printed a poster with a QR code that students could scan, taking them to a Google Form where they could sign up for support with a challenging issue they are experiencing with another student or a staff member.

Two students at Smoky Hill High School, senior Tre Rangel and junior Savannah Johnson, have worked with Reed to address issues they have faced at school and seen the ways he has helped their peers. Johnson shared that she had experienced conflict with a student last year and that working with Reed gave her a new way of seeing the situation.

“He never tells us that we’re wrong,” Johnson said. “He doesn’t try to argue with us but he asks how he can get me back on track. He believes in me and knows I can do better.”

Rangel said that he’d struggled with feeling disengaged at school, but that Reed helped him identify small changes and ways to focus on himself. 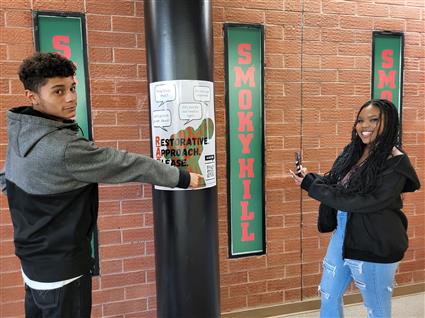 “When I didn’t feel like going to classes, Reed reached out to me and to my teachers,” Rangel said. “He would tell me how I should make the right turn and not take the hard left turn. He helped motivate me to go to class, even if I couldn’t be fully present. He helped me realize this is my final step before graduation.”

Rangel and Johnson agreed that Reed speaks from his heart and treats you like you’re part of his family. He holds students – and staff – accountable for having high expectations for themselves. His approach of inspiration over punishment has transformed the lives of more than a few members of the Smoky community. Now students are provided with ways to address conflict rather than resorting to suspensions, which can negatively impact students academically and socially.

“They suspended me three times last year,” Johnson shared. “My grades were in the gutter and I couldn’t catch up. If we had the restorative approach, we would have just moved past it.”

“Being suspended means you fall behind and then maybe you don’t care anymore,” Rangel said. “But if you can resolve the problem and stay in school and in academic recovery, that’s better than missing school.”

Students and staff agree that Reed goes the extra mile and comes from a place of authenticity, which helps students feel they can share and be vulnerable. He focuses on finding solutions and helping students be their best selves. For Johnson and Rangel, that’s graduating and pursuing a career path that brings them purpose and joy.

“Mr. Reed helps me feel like I can do anything I want,” Rangel said. “I want to look at culinary schools or a trade school because I want to start my own business. I’d like to cook Panamanian or coastal Mexican food and maybe have a farm.”

“He’s helped me look at what I’m doing and I think about if he would approve,” Johnson said. “He’s helped me become a better person and believe in myself. I want to graduate early and go to college for psychology and maybe work with children. I want to work with people like me because I know where they’re coming from. I want to be like a Mr. Reed.”