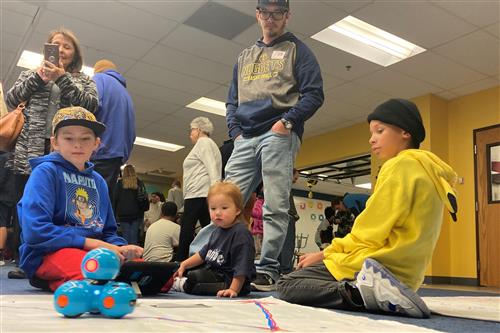 On the day before Thanksgiving break, dozens of special guests flocked to Cimarron Elementary. They included parents, grandparents, and other family members, who watched in amazement as Cimarron students demonstrated some of what they had learned this fall.

“We’re showing everyone about the constellation Revolving Female or Cassiopeia,” explained fifth-grader Ayden Ammons. As his parents and younger brother watched, he and fellow fifth-grader Jordan Williams used a tablet to control a robot, which they had programmed to follow a map they had drawn of the constellation found in the northern sky. Their audience was impressed by their technological knowledge and skills.

“It tells me they’re doing a lot with technology, which is awesome,” added Paige Ammons, Ayden’s dad. “That’s the future for everything, so the more technology they can learn and understand, the more it will benefit them.”

In addition to their computer coding and robotics skills, the boys also shared their knowledge of how the Navajo people regard the Revolving Female constellation.

“When she passes, the Navajo celebrate because she has a stone and string to keep her people well-fed,” Jordan Williams said.

“I really love how they incorporated the indigenous culture, talking about the Navajo meaning of different constellations, especially during Native Heritage Month,” Deserea Richards said. 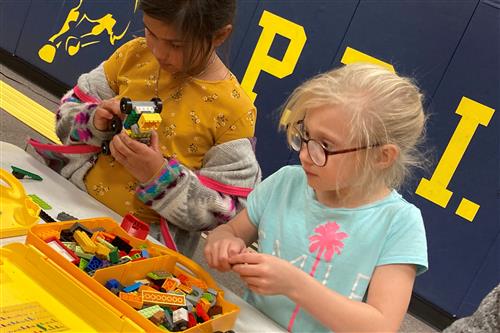 While fifth-grade students guided robots through the stars on the floor of the library, the rest of Cimarron’s students demonstrated equally impressive projects. For example, kindergartners taught their guests how to program four different kinds of robots while third-grade students shared detailed information about mythical creatures they had created. It was all part of the first-ever Cimarron Showcase.

“Each grade level showed off a project that integrated their content and some aspect of STEM, which stands for Science, Technology, Engineering and Mathematics,” said Becca McMillan, Cimarron’s STEM teacher. The event replaced Cimarron’s traditional Grandparents’ Day and STEM Night with something more fun and interactive.

“It’s been really positive,” McMillan said of the reaction to the new event. “Our families really love being here with their kids and getting to try things with them. It’s a little different than just coming and sitting and listening. They’ve actually gotten to interact with the kids and the projects they’re doing.”

The Cimarron Showcase aligned perfectly with the Core Values of the Cherry Creek School District, especially Growth Mindset and Engagement. But most importantly, it highlighted the high-level learning taking place at Cimarron.

“There’s been a lot of surprise at what kids can do and that they’re doing this in school,” McMillan added.