The results are in! Arrowhead Elementary officially has a new mascot. Students campaigned for weeks for the mascot they wanted to win with different videos for morning announcements and posters on the reasons they thought a certain mascot should win. Students, staff, and community members cast their ballots on Election Day.

After some hype music, Principal Kelsey Jones and Assistant Principal April Hrovat pulled back the curtains to reveal the fox! As soon as the students saw their new mascot, cheers and screams filled the gym while the fox danced and high-fived the students. 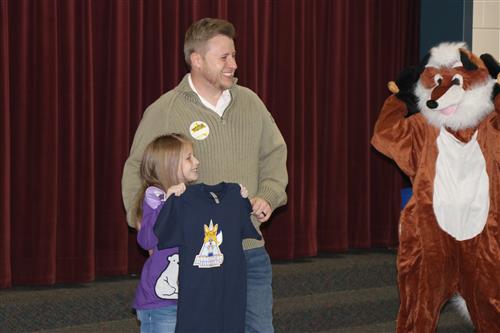 Foxes won with 43%, the lions came in second with 30%, and the stegosaurus had 27% of the votes. Tyler Brayton, a father to third grader Ellie, designed the new Arrowhead Elementary School logo. Each student and staff member went home with a shirt that had the new logo on it. 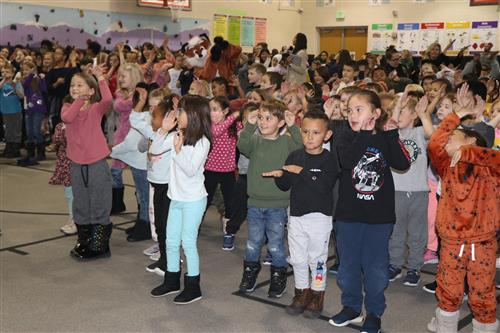 Besides the chant, students also learned the new fox dance that teachers made up that goes with the song “The Fox (What Does the Fox Say?)” by Ylvis. Yes, the song will get stuck in your head, and the students caught on to the dance moves quickly.

After the Colorado Legislature passed a law in 2021 prohibiting the use of Native American mascots by schools unless they have an agreement with a specific tribe, Arrowhead Elementary had to discontinue its previous mascot, the thunderbird. The students, staff, and the community were thrilled to have a part of deciding on a new mascot.