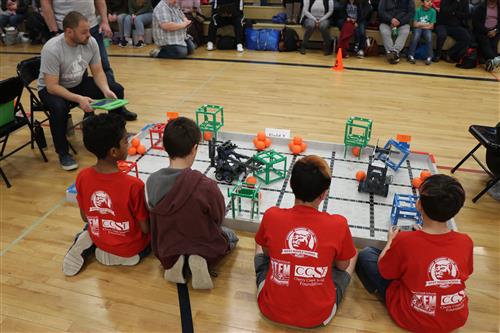 The first annual Robocon event held Feb. 29 at West Middle School offered Kaura Caldwell the chance to take her interests, her skills and her passions to another level.

Caldwell, a fourth-grader at Altitude Elementary, has long been fascinated by projects that involve building and problem-solving. These are skills she’s already refined working on complex Lego construction projects and technology projects at home and in school. The Robocon event, which was supported by the Cherry Creek Schools Foundation and saw 346 students from across the Cherry Creek School District competing on more than 80 teams, featured hand-crafted robots performing intricate tasks. It was a perfect complement to Caldwell’s interests.

“I really like figuring stuff out with my mind. The Robocon event seemed cool – you get to build a robot, you get to come to a competition and do your best,” said Caldwell, who’s a member of Altitude’s after-school robotics club and who hopes to eventually become an engineer. “I’ve gotten to learn about teamwork and problem-solving here, and I really like how everything has been set up.”

Caldwell and the rest of the Altitude team took part in a daylong series of timed contests, fast-paced competitions that featured individually crafted robots scuttling across game boards and moving cubes. The K-8 Robocon tournament represented the evolution of what had been, in previous years, smaller-scale contests featuring different technologies. This year’s event was the first that saw such a big group of teams participating under one roof.

“This year’s Robocon features Wonder League, Vex IQ and Jr. First Lego League,” said Ryan Remien, a STEM teacher at Altitude Elementary. “We’re always looking at building well-rounded skills, and this event really stresses collaboration and communication. The students here get to see all of these different robots; they get to witness firsthand how they’re all unique and different. They can take ideas and apply them to new building projects.”

The combination of teamwork, problem-solving and Science, Technology, Engineering, Arts and Math (STEAM) skills at Robocon was a perfect complement to Cherry Creek Future Forward, the district’s long-term plan for continuing excellence well into the future. The Instructional Excellence component of the plan states in part that the district will provide “ALL students with rigorous and relevant learning experiences,” and Robocon’s diverse array of technology, teamwork and competition fit that standard.

“This event is all about problem-solving and real-world application,” said Michael Koban, a STEM teacher at West Middle School who helped organize the Robocon event. “Students aren’t doing this for a grade; they’re doing it because they enjoy it and because it’s their sport. This is something we can hopefully keep at West in the future.”

Caldwell was one of the students who was fully enjoying the competitive nature of the event. After an afternoon session, her team had secured a third place rank and would thus be moving on to the championships.

“I feel pretty good,” she said. “This has been such a great experience. It’s really taught me a lot about teamwork.”