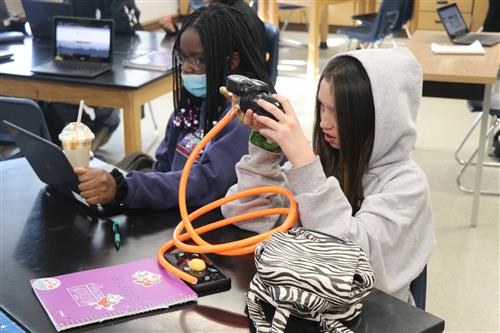 More than 200 sixth-graders from Horizon Community Middle School organized an ambitious weather balloon launch on April 8, an experiment that sought to answer questions about atmosphere, weather conditions and the natural world.

But while the sixth-graders took the lead in assembling and executing the experiment, the crowd that gathered on the field outside of the school on a sunny Friday represented a much broader swath of the school community. There were the staff members and parents who came to watch the two massive balloons loaded with student-designed experiments float into the sky. There were the teachers and district coordinators who’d helped the sixth-graders execute their vision. There were also dozens of fifth-graders from nearby Summit Elementary in attendance, students who’d be heading to Horizon at the start of the 2022-23 school year.

“These Horizon students have been partnering with the Summit students, which I think is a really wonderful opportunity for the sixth-graders to take on more of a leadership role,” said Lauren Dill, the Horizon sixth-grade science teacher who helped organize and execute the weather balloon launch. “It lets the older students get into a more empathetic mindset, as they meet and work with the fifth-graders who are going to join us next year … I really hope these relationships we’re trying to build carry over into the next year.”

Fostering and building relationships is one of the core values that drives the entire Cherry Creek School District’s pursuit of excellence, and that same priority was clearly at work as sixth-graders took on the role of mentors and role models for their Summit counterparts. Horizon students played a variety of roles during the event, from event emcees to videographers to those handling the physical demands of the launch. As they did, they kept up a connection to the fifth-graders who had a firsthand view of the entire process.

“We are Horizon Community Middle School, and this experiment has really stressed the ‘community’ part of that title,” Dill said.

Of course, relationship-building wasn’t the only aim of the experiment. Teaching students fundamental lessons about Science, Technology, Engineering, Arts and Math (STEAM) was also at play, as students carefully planned payload portions to the attach to the two weather balloons. Over the course of several weeks, Horizon students became amateur meteorologists, designing mini-experiments that would take place thousands of feet in the air.

“I’ve been interested in science since elementary school, and this is such a cool way to explore that,” said Royal Wilson, a sixth-grader who acted as event emcee. “I’m so excited to see the balloons launch and see what happens!”

According to Dill, the students submitted formal experiment proposals that included details about variables and atmospheric science. The balloons carried experiments with variables ranging from plant life to cotton candy to live crickets.

“The kids know that we are limited to about two pounds for all of our experiments, so they’ve been really focused on what atmospheric variables change as you go up and down,” Dill said. “There’s also that constraint of minimal weight and size.”

The students had the input of professionals in the STEAM field as they saw all their hard work come to fruition. District staff members like Elementary Project Support Team member Randall Berkheim were on hand to assist with factors like helium for the balloons and ensuring the flight path was cleared with the Federal Aviation Administration. Denver7 Chief Meteorologist Mike Nelson also joined the students, teachers, staff and community members at the Horizon campus on April 8 to celebrate the successful launch of a carefully planned exploration of the atmosphere.