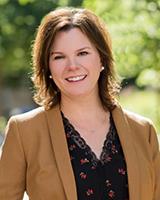 Anne Egan has had the chance to see how the Cherry Creek School District functions at all different levels.

Egan, who was sworn in as the CCSD Board of Education District A Director in November, has long had a well-informed view of the district of more than 55,000 students. A former education policy advisor with Colorado Gov. Roy Romer, Egan and her family specifically moved to a home in the district for the schools. Her four children have all progressed through Cherry Creek Schools.

This experience has come in addition to longtime roles within the district – Egan has been an active member in CCSD organizations ranging from elementary school PTCOs to the Cherry Creek Community Legislative Network. All of this work within the Cherry Creek School District and beyond made running for the school board in 2019 feel like a perfect fit.

“It was important for me to give back to the district,” Egan said, adding that at one point, she had four kids in four different schools. Each found their own path to excellence within the district, and each drew on resources within their classrooms to forge their own pathway of purpose. “The district has always done a great job. I want to continue conversations about mental health, diversity and inclusive excellence and innovation in education.”

Egan certainly has the experience and the know-how to keep those issues at the forefront in her new role on the board (she earned a master’s degree from the University of Denver). Egan is used to working hard behind the scenes to maintain the district’s tradition of excellence, and she wants to bring those skills to bear in implementing the ideals and values encapsulated in Cherry Creek Future Forward, the district’s roadmap for maintaining excellence well into the future.